Weight gainers according to biological standards - mode of action and composition

A weight gainer is a dietary supplement that is used to increase body mass . No distinction is made between fat-free and fat-containing body mass , as the main purpose of this supplement is pure weight gain. Especially for these purposes, Weight Gainers mainly contain macronutrients in high concentrations, which means that this supplement has a high calorie density. 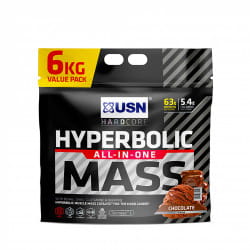 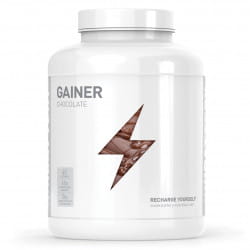 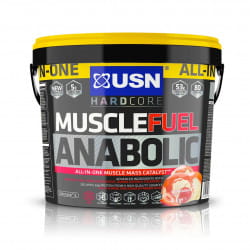 These are composed primarily of the macronutrients protein and carbohydrates , but less of fats. In this context, proteins are helpful for building muscle mass during intensive training loads. By building up muscle mass, the user can gain body weight quickly and easily, since muscle mass has a much higher density than body fat. The carbohydrates contained in Gainer serve primarily as an energy source to supply the muscle building with energy. As a rule, these are mainly short-chain carbohydrates that are quickly available to the organism - for example, simple sugar or malt sugar in the form of grape sugar or maltodextrin .

The advantage of short-chain carbohydrates is not only the direct supply of energy for muscle building and the related anabolic metabolism, but also the possibility of storing excess energy in fat deposits, which can lead to additional weight gain. This is made possible by the increase in blood sugar levels due to the increase in short chain carbohydrates. Through the subsequent release of the hormone, the free glucose is transported into the respective muscle cells, where it can then be used for muscle building.

In addition to the ingredients mentioned, many weight gainers also contain active ingredient combinations of creatine and various amino acids such as glutamine . The body's own acid creatine favors increased water storage in the muscle cells and ensures increased performance of the muscles, which can lead to stronger training stimuli and thus more adaptation. In this context, glutamine supports the replenishment of glycogen stores after training, which leads to an improved metabolism of short-chain carbohydrates.

Use Weight Gainers for muscle mass, weight gain and as a meal replacement

The extensive nutrient pool and high calorie density make Weight Gainers particularly interesting for strength athletes and bodybuilders. Macronutrient-wise, gainers usually consist of 20 percent protein and 70 to 80 percent carbohydrates. Since these contain a relatively high energy intake with a low meal volume at the same time, muscle and strength building can be supported in the best possible way by this dietary supplement . Gainers offer extensive advantages here, especially for athletes with a fast metabolism or an ectomorphic physique.

Gainers can be used for this target group in the form of powders or ready-made drinks and thus serve as meal replacements or between meals . To ensure the fastest possible availability of the ingredients in the weight gainer , they should be consumed in conjunction with water and not with milk, as the milk fat contained in the milk prevents rapid absorption. By taking it up after training, the glycogen stores emptied by training can be quickly replenished so that they can support muscle building in the best possible way. Weight gainers can be used all day by the appropriate application group - for example, before training, as well as after training or as a snack. Gainers are also suitable for users who generally want to gain weight.