Caffeine (also called caffeine ) comes from the group of substances known as xanthines and is an alkaloid . Because of its effects, caffeine is one of the active substances with a psychoactive effect . The psychoactive mode of action of caffeine is stimulating , which is why caffeine is often referred to as a natural stimulant . Caffeine can be found naturally in beverages such as coffee , tea , mate tea , energy drinks and workout supplements . 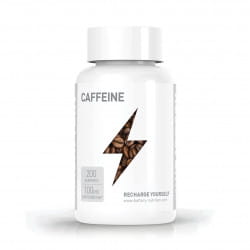 Caffeine in powder form can also be obtained as a chemically pure form as an odorless, crystalline and white-colored powder - that has a bitter taste and can be used as an ingredient in shakes or drinks. Due to its versatile uses and its comparatively harmless use, caffeine is one of the most commonly used pharmacologically active substances in the world. Basically, plant-based caffeine occurs in coffee beans and tea leaves .

Depending on the type of coffee or tea, caffeinated drinks contain on average between 0.9 and 3.5 percent caffeine . In terms of its effects, caffeine has a stimulating effect on the central nervous system . It increases the contraction force of the heart muscle and increases the general heart rate. This can result in increased physical and mental performance.

Caffeine is therefore often used in the form of coffee as a stimulant or in the form of dietary supplements for high-intensity workouts. Furthermore, due to its metabolism-stimulating properties, coffee can also be useful in the context of weight loss.

Use caffeine for training and for weight loss

Since caffeine is a natural stimulant, it can be ideally used as a pre-workout or intra-workout booster . It is advisable to consume a cup of coffee before a training session or an energy drink during intensive training sessions. In addition, caffeine in the form of coffee , energy drinks or concentration boosters can also be used in mentally demanding situations such as exams or at work in order to fully exploit the individual performance potential.

Since caffeine also stimulates the metabolism of the human organism, it can also be used perfectly for weight loss . Here, caffeine in the form of sugar-free drinks or in powder and tablet form can be used to boost the circulation and thus fat burning.

Here, however, attention should be paid to the biological standards of the supplemented caffeine, which should only come from natural sources. Furthermore, when consuming caffeine , care should be taken that it is taken at least 6 hours before going to bed, otherwise the individual quality of sleep may suffer. If caffeine is consumed in moderation during the day, it can ultimately have a positive effect on performance and health.